Spainudp scientists from the Rare Disease Research Institute (IIER) and the Rare Disease Network Biomedical Research Centre (CIBERER) ISCIII has published in the Orphanet Journal of Rare Diseases’ an investigation describing five new cases of a very rare rare disease. There are approximately 6,000 defined rare diseases, affecting millions of people worldwide, a number that is growing as research and diagnostic improvements progress.

Recently, the scientific community is trying to define a new rare disease derived from the syndrome. It is a neurological disorder and development in addition to intellectual disability, speech problems, muscle weakness, heart malformations and visual problems, among other characteristics, and is known as KAT6A syndrome.

There are only 80 documented cases of this syndrome, generated by alterations in the lysine acetyltransferase 6A gene (KAT6A), so the natural history of the disease is not yet fully defined.

Scientists from IIER and CIBERER have confirmed in these five new patients some of the problems associated with this disease and have described new symptoms and characteristics of its development. The clinical profile has been detailed and the definition of this rare disease has been refined, improving the characterization of the phenotype of patients.

The study is co-directed by the ISCIII’s Research Institute for Rare Diseases (IIER), with Estrella López-Martín and Eva Bermejo Sánchez as lead authors, and by researchers from the Faculty of Biology of the University of Barcelona, with Roser Urreizti, Daniel Grinberg and Susanna Balcells among the signatories. Both groups belong to CIBERER, as do the other researchers who collaborate in the study, belonging to the hospitals Del Mar and San Juan de Dios (Barcelona) and La Fe (Valencia), and to the University of Adelaide (Australia).

In addition to the clinical picture already known in this syndrome, the authors have observed in these five patients new symptoms such as cryptorchidism (testicular condition), syndactyly (union between two or more fingers) and trigonocephalus (deformation in the frontal part of the skull), in addition to the occurrence of recurrent infections. One of the patients also has no cardiac involvement.

In studies conducted in silico (using computer simulations), the researchers observed that this Missense mutation generated a partial process of aberrant splicing (abnormal binding of genetic material) leading to a premature rupture of the protein, that would be at the origin of the development of the síndrome. 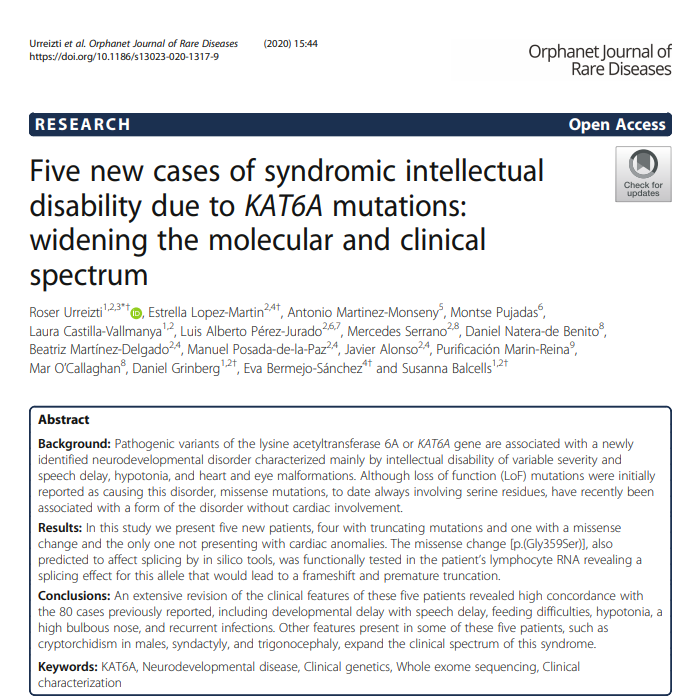